The Return Of Sinister Lunchmeat ! 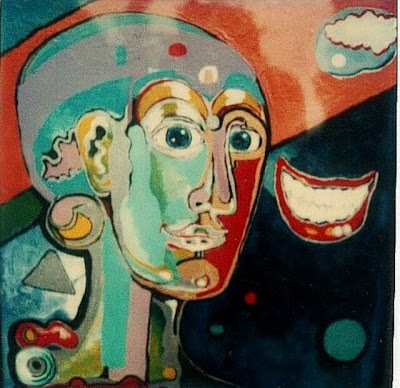 I created the Name Thorndike Pickledish when a teenager--and recently I found 2 photos of my first paintings at 14 or 15 years old...yep ...my parents let me paint nekked ladies, as long as they were from my imagination, this one was obviously a figment of my imagination--and very handy for reaching for jars on the top shelf... 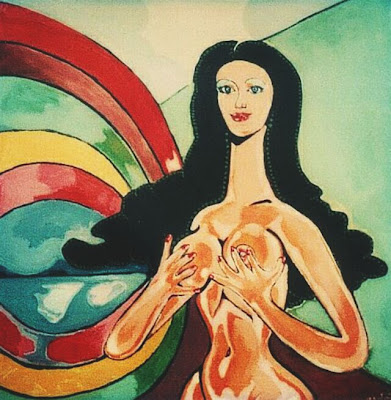 Why the nostalgic look back at Thorndike?? well recently I've noted that some young kids in California and beyond are adopting (stealing?) the name for their "My Space" pages...I even found some kid in Japan who was calling himself 'TP' for awhile...hell? am I mad? will I sue...nah...it's kinda like a pinch o' flattery...so just as long as people know where all the 'TP' stuff came from....and speaking of that...I've dug out my old 45 that Doctor Demento used to play on syndy radio called Sinister Lunchmeat...altho he preferred to call it "Stony Baloney" --and now I'll put it up for you to listen to...but note...Blogger doesn't seem to have a sound only upload place..so I had to make a 'slide show' of my art --er---toonz to keep you company..so as you listen you do not have to watch the screen--that is just there to keep you company and is NOT attempting to synch up...these are just some of my recent scribbles with mouse and a few programs I'm fond of...and if there are kids in the room (or you are at work) the visuals are about PG or so rated...


This is dated material--1976 was the year I made it...and I guess the Political references are self explanatory, Nixon, Hubert Humphrey

But one that might need explanation..."Apple in the garden of Ray" was NOT about Dixie Lee Ray. Govenor of Washington State at the time, but about Elizabeth Ray, who was the central figure in a much publicized sex scandal in 1976 that ended the career of U.S. Rep. Wayne Hays (D-Ohio).

That's bout all ya need, to now, relapse and enjoy in Bafoonaphonic Mono--my 'pasty resistance' of 70's vinyl !
Posted by Thorndike Pickledish at 3:16 PM 1 comment:

The other day I was pondering the fact that my DVD "Terrorist Donut" wasn't selling like...donuts...and I thought, "Hey let me 'Google' it"...to see if anyone is finding the original plug--
ORIGINAL BLURB AND TRAILER
And sure enough, there it was, the URL and a few notes on it's content...but the only OTHER thing listed was Rachael Ray's commercial for Dunkin donuts where they likened Ms. Ray’s scarf to the type typically worn by Muslim extremists. complaints said that the ads “casually promote the symbol of terrorism" and the intifada, the keffiyeh, via Rachael--well, hogwash, it was just all a misunderstanding --but Dunkin canceled that ad campaign rather than stir up any iced coffee..er..trouble...

So now, I can say I titled my dopey little video over this timely event!! and watch snails go thru the roof...er..sales...go...

oh well, at least NOW I have a good excuse for that goofy title ! However, I'm not taking any of my DVDs on my trip to Phoenix Friday...My luck, I'd be questioned just for having that WORD present in my luggage--ahh the joy of flight

Thorndike Pickledish
Vancouver, British Columbia, Canada
Robert O. Smith is The strongest 67 year old drug free Bench Presser in WABDL with a 578.5 pound official lift...He also Has World Masters Bench records in IPF and AWPC, full Powerlifting records still remain in the equipped division of WDFPF (set in 1998-99) Robert O. also holds National records in CPU and CPO (Canada)and has set World records in AAU, WNPF and GPC in the past. His lifting blog is "Bench Bozo" --------------------------- Thorndike Pickledish is: A 1960's Novelty record figment...who grew to be a voice actor on animations like Pocket Dragons,Billy the Cat, GI Joe,Project AKO,Monster Mash, and who now dabbles in odd,bizarre, animations for the hole in the Family ! see blogs called "All Hail Thorndike Pickledish"