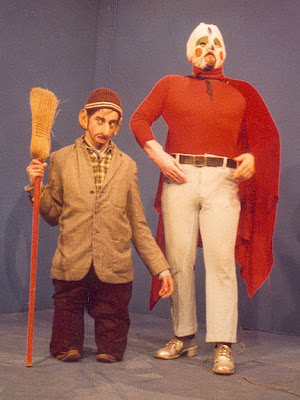 Doctor ZinGRR's character the Masked Doily (Mexican Wrestler spoof)
It's too easy to blow my cover and let my other identity's out....so rather than staying in my Thorndike Pickledish skin all the time, I leave crumbs along the trail to my Bench Bozo headquarters, and even have hinted at my incarnation as Monster Movie host Doctor ZinGRR in the 70's--but recently a friend found an exhaustive file on this Northwest TV icon of the past...with patience you can find the history at the end of this link;
A link to Dr ZinGRR click then scroll to near the bottom
Way down to Z ya know !
This was a very fun time in my life...I liked doing this show more than my radio work, my stand up comedy, novelty records, anything...one untold story....

I still have suitcases of fan letters from this show that are 'gold' to me...among them a letter from a mental institution near Tacoma Washington that told me...that when my show came on...the inmates in the TV room would howl and shriek with laughter as soon as my 'characters' came on...and they caused an uproar like no other TV event in the history of this State hospital...The psychiatric technician who wrote the letter appeared to be on the level when he said I was the FULL MOON to these people...the commotion was such that some docs' wanted the show banned in the rec room--but he said he insisted it would be his responsibility to keep it tame...thinking of this letter makes me feel like it has all been worthwhile...I had found my true audience but yet never knew it til the show was about to leave the air...here's to those patients...my children of the night ...what music they make !
Posted by Thorndike Pickledish at 6:10 PM

I wonder how your show would play in my mom's care home! I'll bet you'd be the darlin' of the Alzheimer crowd...and just think, you could recycle your material, and it would always be fresh!!

Great link, great stuff--the Messkin wrassler breaks me up even as concept.

Und he grew up to be US Secretary of the Treasury under Bush, right?

Paulson, Paulson--does that ring a bell?

Thorndike Pickledish
Vancouver, British Columbia, Canada
Robert O. Smith is The strongest 67 year old drug free Bench Presser in WABDL with a 578.5 pound official lift...He also Has World Masters Bench records in IPF and AWPC, full Powerlifting records still remain in the equipped division of WDFPF (set in 1998-99) Robert O. also holds National records in CPU and CPO (Canada)and has set World records in AAU, WNPF and GPC in the past. His lifting blog is "Bench Bozo" --------------------------- Thorndike Pickledish is: A 1960's Novelty record figment...who grew to be a voice actor on animations like Pocket Dragons,Billy the Cat, GI Joe,Project AKO,Monster Mash, and who now dabbles in odd,bizarre, animations for the hole in the Family ! see blogs called "All Hail Thorndike Pickledish"